My Little Pony Friendship is a Miracle Forums
Would you like to react to this message? Create an account in a few clicks or log in to continue.

My Little Pony Friendship is a Miracle Forums

Welcome to the new rebirth of an abandoned mlpfimforums website

» WTF-Stuff about anything and nothing

My Little Pony Friendship is a Miracle Forums :: BEYOND MY LITTLE PONY :: Current Media

The male to female transgender teenager, called " Annie Andrews ", drawn by myself as her creator, GreenKrog, draws her. Annie is the main character of the web comic called " Wildflowers ". Here, I drew Annie dressed in the Japanese Urban Street Fashion called " Gothic/Lolita ". Annie loves to sing, and is singing here on stage, before a live audience---

THE ANIME MALE TO FEMALE PROJECT AND ART GALLERY

Anime ( animation made or produced in Japan ) and Manga ( comic books published in Japan ) have had a long history of having transgender characters incorporated into various anime series and anime movies. Many of the transgender anime characters have been anime boys who can change into anime girls. This section, to be created within this art gallery, will have posts and comments that feature a particular character for each post, and pictures and descriptions about that anime or manga character. This Project and Art Gallery will have and be showing ONLY male to female anime and manga characters. Each character section will have---

This will be an on-going project, pending time and availability for research and web design. It is my hope that those who view this Project and Art Gallery will be encouraged to attend to and proceed with their own transitions, if any, or to become an ally of transgender people. 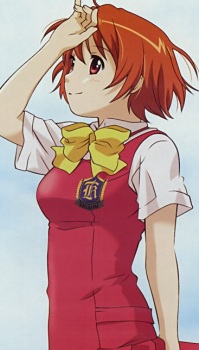 Being a teenage girl is harder than it looks...
For Hazumu, this couldn't be truer, because just the other day, she...was a he.

Turned down during a Love Confession by the girl of his dreams, Hazumu loses himself in the mountains and is promptly
killed by a falling, disabled space ship. The humanoid alien entity inside, feeling guilty, resurrects Hazumu back to
life...but as a girl, since that human sex was the only one that the alien had 'blueprints' for !

Now Hazumu must learn how to be the girl his parents always wanted, while dealing with the trials and tribulations of
being caught in a love triangle between two cis-gendered girls---his childhood friend, Tomari, and Yasuna, the girl who
rejected Hazumu because she is interested only in girls, but is now strangely attracted to female Hazumu !

My Little Pony Friendship is a Miracle Forums :: BEYOND MY LITTLE PONY :: Current Media